We slept like rocks after NYC day 1, and again, I stayed up much too late writing and reviewing the Day 1 events, and planning for Day 2.  But, we awoke to another spectacular day, and easily got ourselves to Grand Central station main terminal for a special ceremony, honoring the 7 directions (N,S,E,W, above, below and divine center).

82 million people pass through this terminal each year, according to statistics found here:  GRAND CENTRAL HISTORY.  Every detail was planned by the architects, and it’s evident upon entering the main area that this is a unique location, filled with enormous energy, movement, light.

We walked into various areas, absorbing the energetics, passing on our own good intentions for peace, love understanding and tolerance among all beings on Earth.

And,yes, tobacco was dropped along the trail 🙂

A lovely ceremony was created. I called in the spirits of all directions with tobacco, opening the energies and asking the helpers and wisdom keepers to allow in all that is for the highest good, clear out the veils that block the free will, end the deception and manipulation of beings by other beings who see themselves as better, smarter, more valued, more important. In each direction, the energies worked to co-crete something new, clear, higher in vibration.

At the end, a tiny jade turtle, representing the spirit of Turtle Island and the native ancestral energies of wisdom and earth-keeping, was place in a crack in the marble floor.  She stands guard there, underfoot, unbeknownst to the passing travelers, yet supporting and guiding all who pass over her.

We ate lunch at Grand Central (fabulous, BTW! what a selection!)and entertained our selves with watching the many types of “patrols” that showed themselves in New York town areas, GC no exception:

Now fortified, it was off to the United Nations.

It was an easy walk a few blocks away. I wasn’t sure what or how long this ceremony would be ( I never really do) but it became obvious once again that “getting inside” wasn’t on the agenda.too much hassle. I settled for adding a beautiful sunstone to the flowerbed at the “Delegates” entrance. I felt this was strongly the place to clear and reset the energies -as people from all over the world walked past me and showed their ID to the guards, i dug a hole and planted Sunstone.

(BTW< I never really know what these crystals do until AFTER i select them…or,rather, they volunteer)

Leaving the plaza I called to the crow energies, to provide a transmitter and beacon, to aid the vibration and to catch the light. Right in front:

We then walked across the street to head back to Grand Central…and saw this was on the wall at a nearby site:

Catching a ride on the Metro again, we stepped off on the east side of Central Park.

If you have not ever been to Central Park, you must go. We had the absolute perfect day for it, and wandering around looking for the needle was made a pleasurable eye-candy experience, with blue crisp skies and Irish green lawns everywhere.

I have this “thing” with obelisks, and one day I will elaborate on it here at the blog. I don’t undertand it exactly, but I am always “told” to go to places that ultimately have a big old obelisk.  (If you recall, this adventure started with finding out there is a big obelisk in Asheville NC, where I stayed the first night of the summer tour. (see “crowtravels” above in the menu)

A recent trip to France demanded that I visit…Cleopatra’s Needle in Paris. There is another in London.

And now, I find myself at Cleopatra’s Needle in NYC.

My view is:  are obelisks generators of energy.  I believe they are placed on spots of extreme earth energy, and have been built in accordance with the technology  associated with ALL pyramids.

So what IS an obelisk?

I think it has other meanings as well…..I think it looks to represent a huge penis. Of course, these type  tower structures are always a sign of male power and force, i.e., the “penetrator”.  (whereas female power spots are open, inviting)

By breaking down  the meaning of various parts of the SOUNDS…O’Baal-esk, I get this:

Its not scientific, its just what I think and what I see as how its being used by the CIC, the cabal, the PTW …whatever name you want to give them.

They have certainly commandeered the obelisks of the world, and like all Cleopatra needles, they moved them from Egypt to places of power for their own personal reasons. (Do a search on the Vatican obelisks for more info)

I have to preface this by saying this ceremony presented itself over time. We were there over an hour, waiting patiently as tourists and locals did their thing. I ultimately had to alter a few things just to get the crystals placed.

Here she is in all her (Cleopatra’s) glory.

Every side has a plaque with the interpretation of the hieroglyphs. The metal claws jutting from the base are those of crabs. The Brit says these were added by the Romans, who first moved the needle from her original site. More Here

Yellow calcite for South, Red mahogany for East, a black lava stone from Hawaii for West, white howlite  for north,green bloodstone for earth (below) blue iolite for above, and amethyst for the divine center.

Tobacco and stones were placed in the garden areas surrounding the needle where they can work with the earth energies in quiet seclusion.

More pictures….note the sundog rainbow and the pineal sphere! 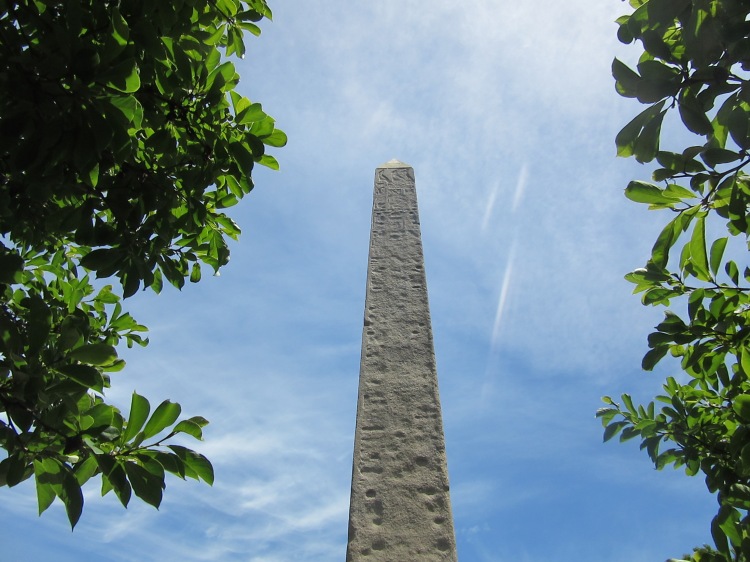 renewed energy pyramid at top, with helping spirits on right

It was hard to leave her, but we felt the need to enjoy and replenish ourselves in the park, so we left her to do her work, being supported in a new way. Aho!

I knew there a calling for me build a peace wheel in the park, but i was thinking  it would be in the center of the Great Lawn. However, spirit redirected  me to the more perfect place. I love when that happens!

This place was so peaceful, and it was incredible to be able to share my prayers here.

Dakota building is behind me…bless you John Lennon.

The wheel will be there as long as needed.  We exited at the nearest park ext and were rewarded

It was time to leave NYC, but not before we at least walked into Times Square. (Dropping tobacco everywhere, of course!)

Yes, it’s a nut house, but I received a lovely lovely gift as we left the square. Right in  the middle of the hustle-bustle, there was a young man holding a sign that said “HUGS”.

Of course, being a Southerner, I know how to give and to receive a hug! I  never turn one down, ever.

I’d like to end this part by adding a few random photos, if you are interested in more.

Thank you! I will continue with the info about the next leg ASAP…the Long Island stops, and on to Boston.

Be well, friends! And don’t forget to tip your hat or have drink for Arturo Di Modico!